Three months ago, no one could have predicted how much the Coronavirus was going to change our lives. We’ve had to adapt in ways that ring out of the realm of ordinary. But as a global population, we are on the edges of our seats, waving our hands desperately with a burning question in our pockets… When will the economy and world go back to normal?

As summer approaches, many of us are getting antsy to enjoy the outdoors and get back into our normal routines (especially for those who live in the colder climates!).

To answer this growing question, we have to look at our past and compare it to where we are at now. One of the worst pandemics in history was the Spanish flu. It ran its course over a two year span and killed nearly 2% of the world’s population. At the time, that equated to nearly 30-50 million people. The Spanish flu decimated the global economy and reduced GDP by 6% to 8% in most countries and up to 10% is some. While technology, awareness, and medicine are much better than they were back in 1918, some researchers believe the Coronavirus could reach the scale of the Spanish flu, in a worst case scenario.

A recent study on the 1918 Spanish flu revealed that the pandemic itself hurt the economy and not the response that was taken. Regardless of shut downs, people are going to make a conscious decision to stop shopping and traveling with a deadly disease looming around. But what’s important is, this study also found, cities that shut down earlier and longer, recovered quicker and did better economically than those that didn’t take appropriate action. 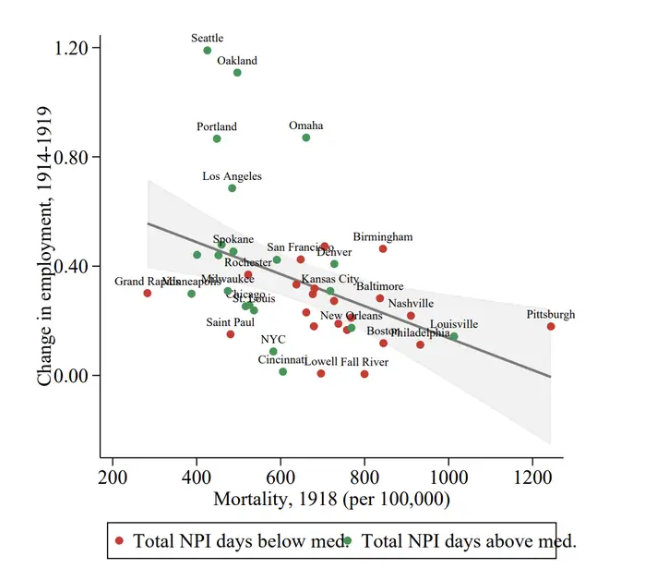 This chart from the study reveals that, as the green dots had fewer deaths, while the red dots experienced more. Moreover, the green cities also fared much better economically than cities in the red.

As far as shutting down cities and events, that part of our lives won’t come back as soon as we’d like. History shows we are better off prioritizing public health and locking down the country. While this may not be best for the economy in the short-term, it will dramatically stimulate growth over the long-run.

When will everything go back to normal?

Based on research, I believe we will start to see some restrictions lifted by the end of May and into the beginning of summer. However, it will probably be 2021 until our society returns back to normal.

As the coming months approach, I expect to see a gradual reopening process. Harder hit regions will remain closed for longer, while lesser hit places will begin to reopen. Just as there was a staggered shut down, we will see the same for reopening.

Even though regions will begin to reopen, large and even small events will most likely still be canceled. Sorry folks, you won’t be going to any summer music festivals until next year. The good news is, you will finally be able to get that haircut when places start to reopen!

Will jobs come back?

Over the past month, nearly 22 million Americans have applied for unemployment. Even the strongest economies will struggle to deal with this and the United States is no exception. When the outbreak starts to subside, economic conditions will improve. However, people who are still unemployed at that time will be hit the hardest.

During past depressions and recessions, companies will start to rehire workers when the economy improves, but they will replace their previous workers with cheaper, more contingent labor. Lowering wages is easy when the economy is slow and workers are grateful for any opportunity they can get.

Even with government subsidies going into effect, like stimulus legislation, the prolonged shutdown will most likely hurt many mom-and-pop businesses that have suffered over the past several years from large competition. Even service jobs, with human interaction, are being looked at differently because of the pandemic, as social distancing becomes more normal.

Once the pandemic subsides, many people will go back to their old ways and some businesses we rehire the same staff. However, other corporations and businesses won’t miss out on an opportunity to cut down on labor costs by using more computers, robots, offshoring jobs, and hiring people who are desperate to get any job.

There is no doubt, the Coronavirus pandemic has been one of the most impactful pandemics in history. In two months our economy went from booming to bust, with over 22 million people unemployed. Our social lives have changed dramatically as well. There are no sports, concerts, going out to eat, and many other things we enjoy doing. However, all of this is only temporary. America and the rest of the world will start to get the Coronavirus under control and there will be light at the end of the tunnel. Don’t expect it to be right away, don’t worry it will come.

Welcome to Financially Obsessed! This is a place where people can better themselves financially and build the life style they have always wanted. The information on this site should be used for educational purposes only. Your decisions are yours alone and Financially Obsessed is not responsible for your actions.